Arginine is an amino acid found in proteins and is generally and widely present. Kensuke Kawade, a specially appointed associate professor at the Exploratory Research Center on Life and Living Systems (currently an assistant professor at the National Institute for Basic Biology) has discovered that arginine metabolism has a specific function in promoting plant morphogenesis, a process of developing the formation of plants, through a study jointly conducted with the National Institute for Basic Biology, Rikkyo University, Toyohashi University of Technology, Yamagata University, RIKEN, Chiba University, Hokkaido University, and The University of Tokyo. The research team has also clarified a mechanism that controls the function. These research results will be published in the U.S. academic journal Cell Reports on September 8, 2020 (U.S. Eastern Daylight Time).

Background of the research 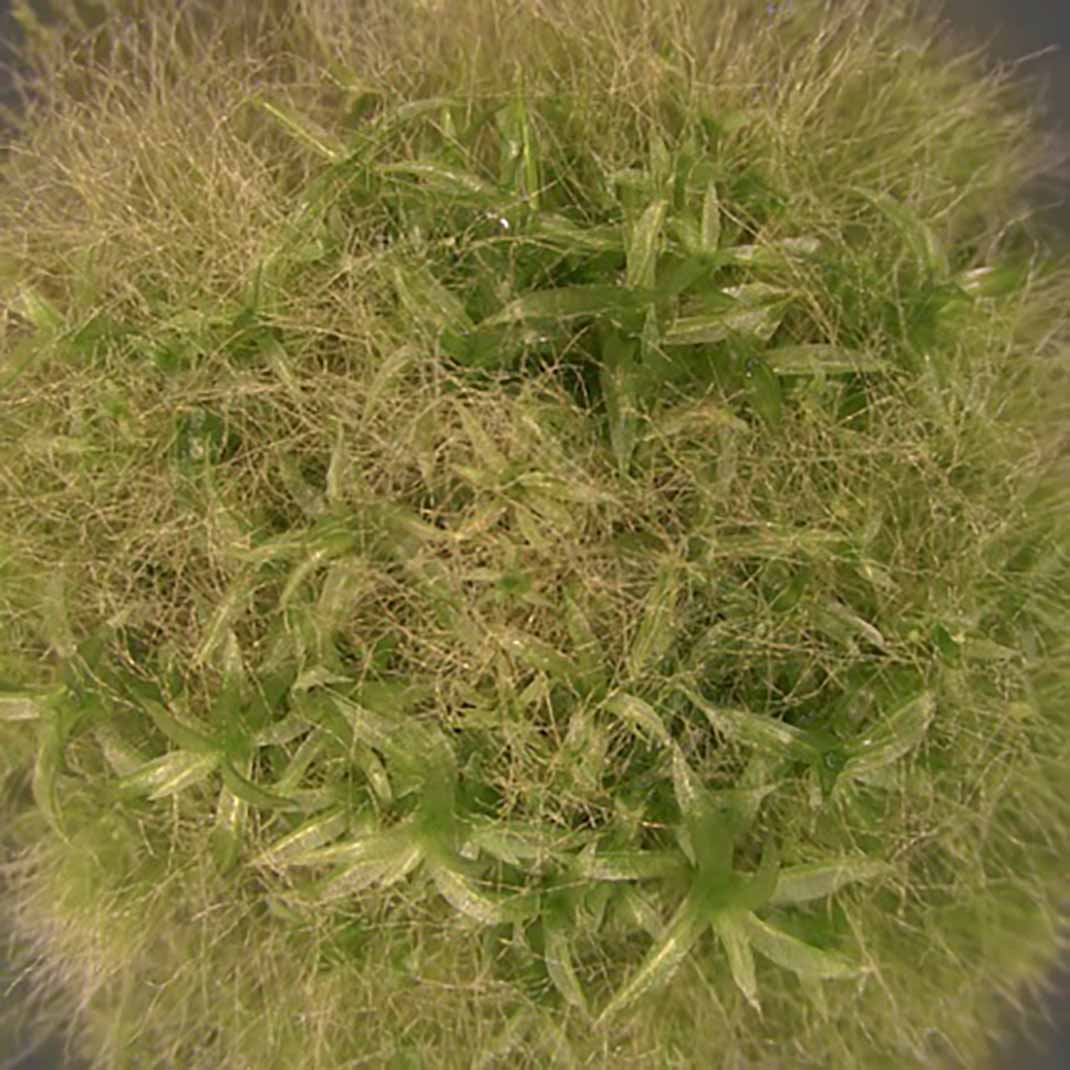 The moss Physcomitrella patens / The light green fluff-like objects in the moss colony are protonema filaments, which grow two-dimensionally. The darker green shoots that protrude upward from the colony are gametophores, which grow while forming a three-dimensional structure.

Physcomitrella patens, a type of moss, produces protonema filaments/shoots, which respectively grow two- and three-dimensionally, depending on the environment (Figure 1). Past studies have revealed various aspects of the plant evolution, such as the discovery of a gene that switches a growth strategy from producing protonema to producing shoots (Note 1). What, then, is the generation process of materials for the cells that are necessary to produce shoots? If the growth strategy has been changed from two- to three-dimensional, a metabolic state must have been regulated accordingly. The research team thus sought to clarify the mechanism wherein a plant body changes its metabolic state in response to a switched growth strategy.

(Note 1) Results by a research team led by Prof. Mitsuyasu Hasebe at the National Institute for Basic Biology, 2012 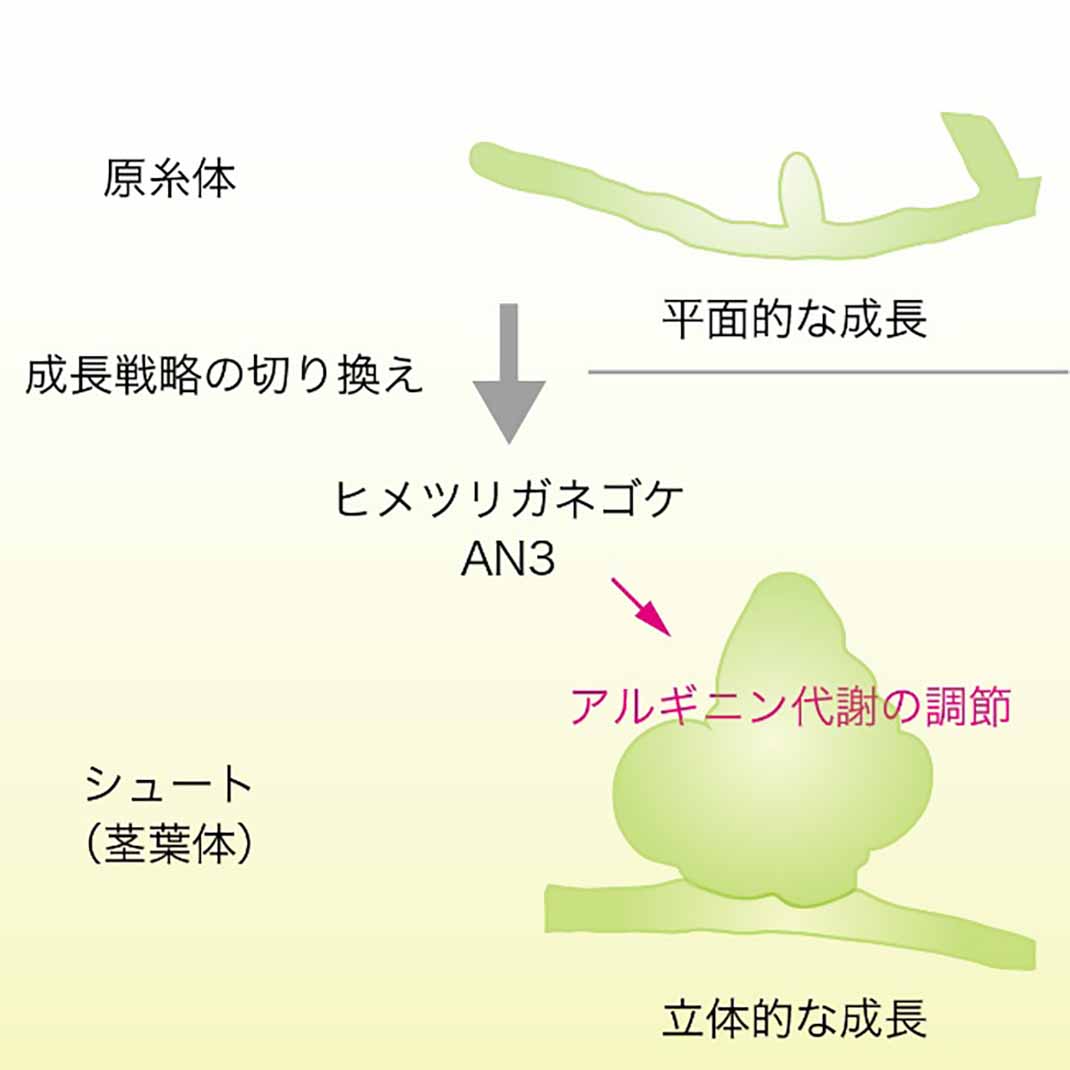 The research team found that abnormalities in the ANGUSTIFOLIA3 (AN3) gene in Physcomitrella patens result in significantly poor growth of shoots. To elucidate the cause of this poor growth, the team examined the metabolic state of the plant body and found that there was an excessive accumulation of arginine, an amino acid. Providing arginine to Physcomitrella patens while growing it, the team found that the growth of its shoots was poor, akin to when the AN3 gene becomes abnormal. The team has also found that AN3 plays a role in activating genes involved in cellular metabolism and growth. Based on these results, the team concluded that the regulation of arginine metabolism via AN3 promotes shoot growth (Figure 2).

Sustaining life is a well-known basic function of amino acid metabolism. This study found that arginine metabolism also has a specific function in promoting shoot growth. If future studies can clarify what kind of metabolite is produced from arginine while shoots are growing, such insight may help determine the metabolites that were key for plants to thrive on land. It is thus expected that a new research field will open up to explore unknown functions of amino acid metabolism, which not only sustains life but also responds flexibly to various environments. It is also expected that elucidating the mechanism linking a plant growth strategy to a metabolic state may lead to developing plant breeding methods for improving not only the shapes and sizes of crops, but also their nutritional values.

This study was led by Kensuke Kawade of the Exploratory Research Center on Life and Living Systems and the National Institute for Basic Biology, joined by Gorou Horiguchi of Rikkyo University, Yuu Hirose of Toyohashi University of Technology, Akira Oikawa of Yamagata University, Kazuki Saito of Chiba University and RIKEN, Masami Yokota Hirai of RIKEN, Tomomichi Fujita of Hokkaido University, and Hirokazu Tsukaya of The University of Tokyo.

Funding for this study

This study was supported by the BIO-NEXT project of the Exploratory Research Center on Life and Living Systems and Grants-in-Aid for Scientific Research (17K15147 and 19H05672), a Ministry of Education, Culture, Sports, Science and Technology program.