An international research group* used an originally developed machine learning [3] model to analyze data from a nuclear emulsion plate irradiated with a kaon [2] beam at the Japan Proton Accelerator Complex (J-PARC) [1], through which they visually detected the generation and decay of hypertritons [4], which are a type of hypernucleus [4]. The group included Senior Researcher Takehiko Saito of the High Energy Nuclear Physics Laboratory at the RIKEN Cluster for Pioneering Research, Senior Professor Kazuma Nakazawa of the Gifu University Graduate School of Engineering, Assistant Professor Junya Yoshida of the Tohoku University Department of Physics, and Associate Professor Masato Taki of the Rikkyo University Graduate School of Artificial Intelligence and Science. 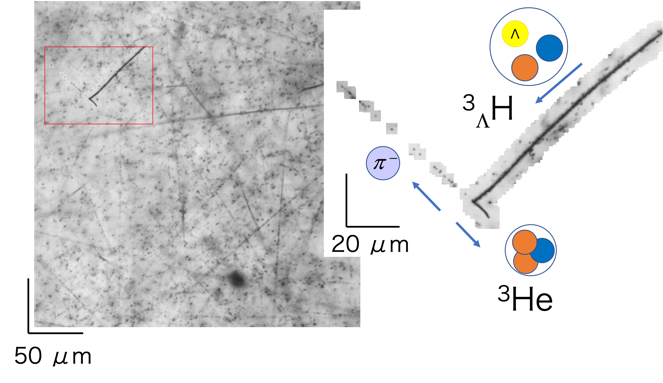 The decay of hypertritons the group visually detected

These findings show that large numbers of hypertritons can be efficiently detected from emulsion plates. Measuring their binding energy [5] to the highest degree of accuracy possible will contribute to solving the hypertriton lifetime puzzle.

A hypertriton is composed of a deuterium nucleus [6] and a lambda (Λ) particle [7]. Measurements of the binding energy created from the forces acting between them obtained up to the 1970s have been trusted for about 50 years. However, recent experiments have shown that the lifetime of a hypertriton from formation to decay may be significantly shorter than the value predicted from its binding energy. Binding energy needs to be measured again precisely to resolve this contradiction, which is known as the hypertriton lifetime puzzle.

In this study, the international research group developed an analytical method that combines physical simulations and machine learning techniques, which they used to demonstrate that it is possible to detect the formation and decay of hypertritons from emulsion plate data.

This research was published in the online edition of the scientific journal Nature Reviews Physics on September 14.

Research support
This study was supported by a Japan Society for the Promotion of Science (JSPS) grant-in-aid for scientific research (A) for "Understanding the interactions between lambda particles and between Xi baryons and nuclei (principal investigator: Kazuma Nakazawa)" and a grant-in-aid for new scientific research (proposed) on "Hierarchical structures of matter investigated with strange hadron clusters (principal investigator: Hirokazu Tamura)".

The matter that exists all around us is made up of multiple atoms. Atomic nuclei are the foundation of these atoms, and are composed of positively charged protons and uncharged neutrons that are bound together by the nuclear force. However, some things about the mechanism of the nuclear force are still not understood.

A special atomic nucleus called a "hypernucleus" has been studied for many years to help understand the mechanism of the nuclear force. In addition to the protons and neutrons that make up a normal atomic nucleus, hypernuclei also contain particles called hyperons [7]. Protons and neutrons are composed of up quarks [8] and down quarks [8], respectively, while hyperons contain strange quarks [8]. By adding particles with properties that differ from protons and neutrons, it is possible to use hypernuclei to investigate how this changes the properties of atomic nuclei, which will broaden our framework of understanding of the nuclear force. Therefore, various hypernuclei with different combinations of protons, neutrons, and hyperons and with different types of hyperons have been created for study.

The lightest of the hypernuclei are the hypertritons, which contain a deuterium nucleus composed of a proton and neutron, and a lambda (Λ) particle, which is a type of hyperon. With these particles, there is what is known as the "hypertriton lifetime puzzle." This comes from the fact that experimental measurements of the lifetime of hypertritons from formation to decay are significantly shorter than the values predicted from the measurements of binding energy obtained up to 1970. In addition, lifetime measurements vary between experiments conducted in different parts of the world, making this an extremely difficult mystery to unravel. The WASA-FRS experiment led by principal investigator Takehiko Saito plans to measure the lifetime of hypertritons at the highest level of accuracy ever with a heavy ion accelerator in Germany in February 2022.

Measurements of the binding energy of hypertritons made using emulsion plates up to 1970 have been trusted for 50 years. However, a 2020 paper stated that binding energy measurements obtained with the STAR heavy ion collider at Brookhaven National Laboratory in the United States could be several times higher than those from 50 years ago *1). Yet this paper did not make a final conclusion due to large errors in the data, which only deepened the mystery surrounding hypertritons. To solve the hypertriton lifetime puzzle, not only their lifetimes need to be measured, but their binding energy must be re-examined at the highest level of accuracy possible.

The international research group decided to investigate the formation and decay of hypertritons using data from a nuclear emulsion plate irradiated with a kaon beam at the Japan Proton Accelerator Complex (J-PARC). A nuclear emulsion plate is a special type of film that can record traces of charged particles that pass through as tracks. Optical microscopy can be used to measure the 3-dimensional positions of particle tracks down to the micrometer (μm, equal to 1/1000 mm). At this level of spatial resolution, the binding energy of each event can be measured to a high degree of accuracy. These emulsion plates are thought to record the generation and decay of hypertritons in massive amounts, and detecting and analyzing them can be used to determine the binding energy of hypertritons at the highest level of accuracy in the world.

However, because emulsion plates do not have time data, it is impossible to know when a particles passed through, and therefore the tracks of all particles that pass through a plate from immediately after it is manufactured to when it is developed are recorded as background events (Figure 1). 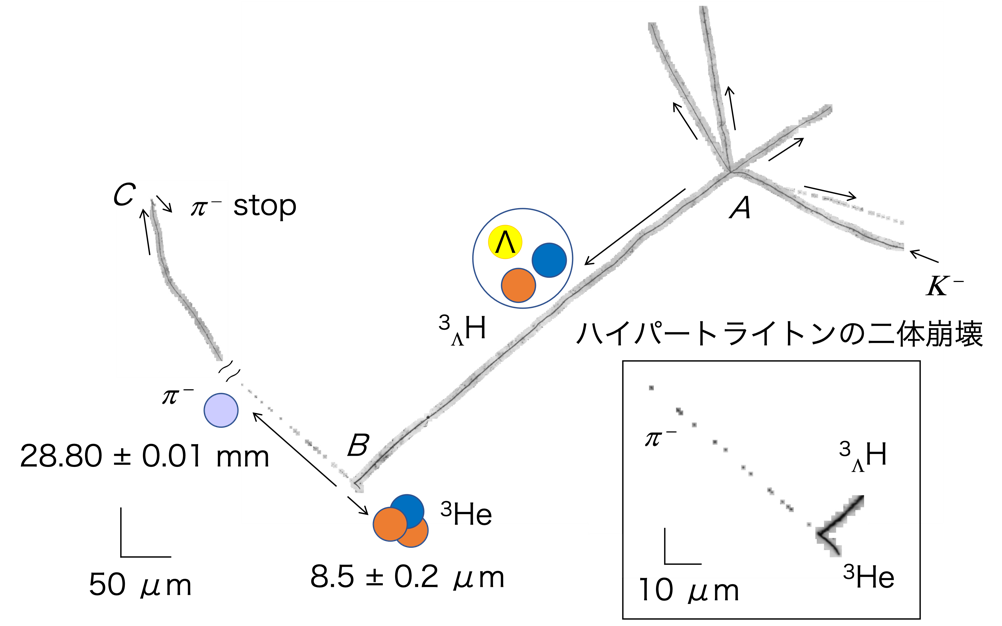 Normally, training data is created by hand-labeling the objects that appear in images. However, because the training data for this study was generated by simulation, the positions and shapes of the targets to be detected could be acquired automatically, which allowed a large number of images to be generated without any manual labor. When a Mask R-CNN that was trained on about 10,000 simulated images was used to analyze image data from actual emulsion plates, it successfully detected traces of hypertritons that came to rest on the plates and decayed (Figure 3).

This study combined physical simulations and machine learning techniques to detect the rare event of hypertriton formation from emulsion plate data that contained a large number of background events. By March 2021 when the paper was submitted, about 1/5,000 of the data from the emulsion plate used in the experiment had been analyzed, out of which 3 unique hypertritons had been identified.

This technique can be applied not only to hypertritons, but also to detecting other rare hypernuclear events. The emulsion plate currently being analyzed may contain records of undiscovered types of hypernuclei and of nuclei formation and decay events that have never been observed. To deepen our understanding of hypernuclei and the nuclear force through precise measurements of the bound energy of various hypernuclei and by detecting new events, further improvements and expansions to this technique are needed going forward.

[1] Japan Proton Accelerator Complex (J-PARC)
A complex that includes a high-intensity proton accelerator and other facilities in Tokai, Ibaraki Prefecture. The complex is jointly operated by the High Energy Accelerator Research Organization (KEK) and the Japan Atomic Energy Agency (JAEA). Secondary particles generated by colliding protons accelerated in the accelerator into atomic targets are used in research and industry in fields such as materials, life sciences, and nuclear and particle physics.

[2] Kaon
Mesons are particles composed of an equal number of quarks and antiquarks. Mesons that contain strange quarks are called kaons.

[8] Up quark, down quark, strange quark
Quarks are the basic particles that make up an atomic nucleus and are currently the smallest known unit of matter. Starting from the lightest, there are six types of quarks: up, down, strange, charm, bottom, and top. Each quark has an antiquark with approximately the same mass and an inverse charge. 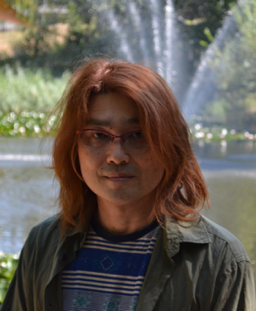 Inquiries
* RIKEN staff are working from home due to the novel coronavirus pandemic, so please make inquiries by email.