A rogue in the “Cosmic Standard Candle”?
The relic of the densest white dwarf has been detected in the remnant of its supernova.

The central density of a white dwarf(※1), immediately before exploding as a so-called Type Ia supernova(※2), has been measured for the first time. The international collaboration behind this new result was led by Yuken Ohshiro, a second year masters student at the University of Tokyo’s Graduate School of Science, working with Professor Hiroya Yamaguchi (ISAS). The measurement was made from observations of the remnant(※3) of the supernova explosion, 3C 397, using the astronomical satellite XMM-Newton that was launched by the European Space Agency (ESA) in 1999. The key that led to this achievement is the first-ever detection of neutron-rich isotopes, including 50Ti (titanium 50) and 54Cr (chromium 54), in the supernova remnant or its debris. Isotopes are atoms of chemical elements with differing numbers of neutrons (charge-less subatomic particles) in their nucleus. These detected isotopes are produced more efficiently the higher the central density of the exploding white dwarf. Using this relationship, the team revealed that the central density of 3C 397’s progenitor was about three times higher than that of a typical Type Ia supernova progenitor. This discovery adds to the mounting evidence for diversity in Type Ia supernovae, which are used in cosmology as distance indicators through the Universe. Better understanding of their diversity will improve the reliability of the distance indicators, enabling a more accurate determination of the history of Universe expansion. The result by the team also provides a clue to the origin of the neutron-rich isotopes that are observed in carbonaceous chondrite meteorites that are thought to be generated during the formation of the Solar System.

This research has been reported in the Astrophysical Journal of Letters, published on June 4, 2021. 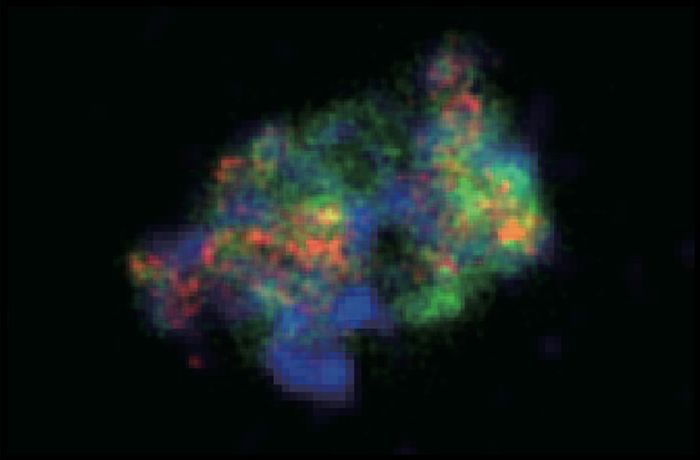 When stars like the Sun (or more precisely, stars with a mass below 8 solar masses) reach the end of their life, they leave behind a remnant known as a white dwarf. This is a compact stellar object consisting of carbon and oxygen. If the white dwarf is in a binary system with a second star, it can continue to increase in mass by accreting material from its stellar companion. This growth can push the white dwarf mass towards the “Chandrasekhar limit” (about 1.4 solar masses) (※4), which is the maximum mass for a stable, single white dwarf. The white dwarf then explodes as nuclear fusion of carbon begins and triggers thermonuclear runaway. This is a Type Ia supernova. Thanks to the uniformity of their peak brightness, Type Ia supernovae have been used as distance indicators or “standard candles” to measure the distance to distant galaxies. This led to the discovery that the Universe was accelerating (2011 Nobel Prize in Physics).

Yet despite its importance, the physical mechanism behind the uniform brightness of the peak luminosity remains unclear. Furthermore, recent studies suggest a diversity in the nature of the Type Ia supernovae progenitors, such as the mass and central density of the pre-exploded white dwarf. This urges a re-evaluation of the reliability of Type Ia supernovae as cosmic distance indicators.

In this research, the team focused on the supernovae remnant “3C 397”, which is a known remnant of a Type Ia supernova in the Milky Way. Preceding work with data from Suzaku, the JAXA-led X-ray astronomy satellite that was launched in 2005, had suggested that the mass of the white dwarf progenitor of 3C 397 prior to the supernova explosion must have been very close to the Chandrasekhar mass limit [1]. This motivated the team to perform follow-up observations of 3C 397 with XMM-Newton, utilizing the satellite’s enhanced angular resolution compared to Suzaku. The detailed spatial distribution of the heavy elements synthesized during the supernova explosion was then investigated, in particular the local mass ratios of Ti, Cr and other elements whose abundance is dependent on the core density of the white dwarf progenitor just before explosion. This analysis revealed a clumpy structure in the southern part of the remnant where the mass ratio of Ti and Cr compared that of iron (Fe) and nickel (Ni) was abnormally high (Figure 1). This is the first time that Ti has been detected from a Type Ia supernova or the remnant. 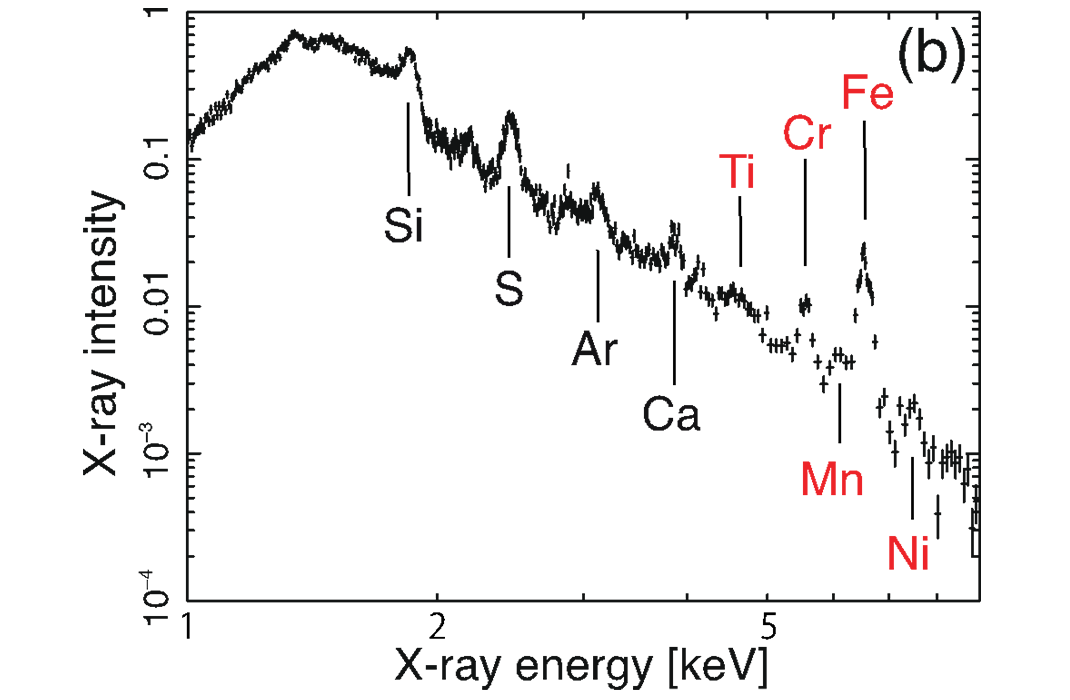 Right: X-ray spectrum of material within the white circle shown in the left-hand figure. Titanium, chromium, manganese and nickel were detected in addition to iron, which is the main element formed during a Type Ia supernova (credit: ISAS/JAXA, Ohshiro et al.). 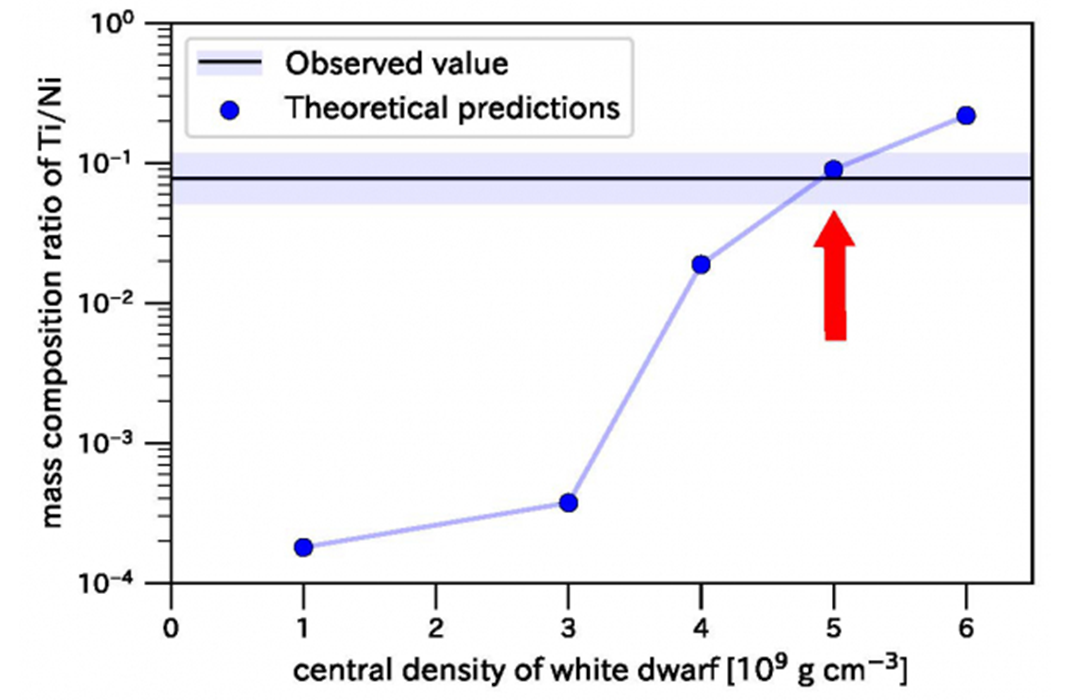 Figure 2: Comparison between the measured result of the mass composition ratio of Ti/Ni (horizontal band) and the computation nucleosynthesis model (solid line) for the center of the white dwarf. The Ti/Ni value rises sharply when the central density exceeds 3 x 109 g cm^-3. The interception with the measured value (red arrow) shows that the central density of the white dwarf that produced 3C 397 was 5 x 109 g cm^-3 (adapted from Ohshiro et al., 2021).

Comparison with models based on numerical calculations of supernovae nucleosynthesis (element production) confirmed that the elemental mass ratios observed in 3C 397 could only be achieved in the innermost region of white dwarfs with a mass close to the Chandrasekhar limit that have particularly high central densities (Figure 2). The central density consistent with the observed elements is about 5 x 109 g cm^-3, which is 2 – 3 times higher than the central densities(※5) that had been previously assumed. When the central density of a white dwarf becomes high, the electron capture reaction(※6) during the explosion becomes very efficient and generates nuclei (the central core of atoms) with a neutron excess(※7). In particular, when the density exceeds 3 x 109 g cm^-3, neutron-rich isotopes 50 Ti (22 protons, 28 neutrons) and 54 Cr (24 protons, 30 neutrons) are produced in large quantities. These are the isotopes that are thought to have been discovered in 3C 397 in these observations(※8).

In this study, the team succeeded in the first determination of the central density of a white dwarf prior to its supernova explosion through a new method that utilized the local mass ratio of neutron-rich nuclei found in the supernova remnant. Of the different elements that exist in the Universe today, isotopes such as 50Ti, 54Cr, 55Mn, 56Fe, 58Ni are all thought to originate in Type Ia supernovae. However, the ratios of Ti/Ni and Cr/Ni that were observed in 3C 397 were about an order of magnitude higher than the current average ratio in the Universe. This supports the theory of a diversity in Type Ia supernovae, with 3C 397 being a “rogue” Type Ia supernovae that leads to particularly high abundances of 50Ti and 54Cr isotopes.

Recent cosmological studies have also shown that the measured value of the Hubble constant—the value that determines how rapidly the Universe expands—changes depending on the distance of the Type Ia supernovae used in the measurement. As more distant supernovae are also older (due to the greater time needed for the light to reach Earth), it has been suggested that the variation could be due to changes in the nature of dark energy, which accelerates the expansion of the Universe, over the Universe’s history. But, it may also be an apparent effect stemming from different abundances of the 3C 397-type of Type Ia supernovae in earlier epochs of the Universe [2].

Going forward, the mass and central density of white dwarfs prior to explosion as Type Ia supernovae other than 3C 397 can be investigated using the same method demonstrated in this research. This will allow for the characteristics of Type Ia supernovae to be clarified so that they can be reliably used as a “standard candles” to measure distances in the Universe(※9). This in turn enables us to reveal the expansion history of the Universe more precisely.

The “X-Ray Imaging and Spectroscopy satellite, XRISM, which is scheduled to be launched by JAXA in FY2022 is expected to be a key component for this research. XRISM has about 30 times the spectral resolution of Suzaku and XMM-Newton and is good at detecting weak emission from elements such as titanium and chromium. XRISM will observe different supernovae remnants, including 3C 397. The official website for XRISM with more details can be found here [3].

The results from this work are also important for understanding the formation process of the Solar System. Carbonaceous chondrites are a class of meteorite found on Earth that contain various organic molecules which are thought to have been formed in the earliest days of the Solar System while the planets were forming, 4.6 billion years ago. Such organics are believed to have been created in the outer reaches of the Solar System and then moved to inwards towards the Sun and the forming terrestrial worlds. This class of meteorite generally exhibits high ratios of 50Ti and 54Cr with respect to 48Ti and 52Cr. As Type Ia supernovae are thought to be a major source of these elements, it may suggest that a Type Ia supernovae originating from a dense white dwarf occurred near the Solar System during its period of formation.

This research is the first observational demonstration of the existence of a high density white dwarf that could explain the isotopic ratio found in carbonaceous chondrites, and suggests that a supernovae of a similar type to 3C 397 may have occurred in the vicinity of the Solar System’s formation. The isotope ratios of 50Ti and 54Cr will be investigated in detail in the sample from asteroid Ryugu (thought to be of a similar type to carbonaceous chondrite meteorites) returned by the Hayabusa2 mission. This is expected to reveal where in the Solar System the parent body to asteroid Ryugu first formed.

※1 A white dwarf is an extremely compact star composed of carbon and oxygen. Stars like our Sun become a white dwarf at the end of their evolution.

※2 There are different types of supernovae explosions. The one that occurs when a star called a white dwarf undergoes a runaway thermo-nuclear reaction is called a Type Ia supernova explosion.

※3 The structure that remains after a supernova explosion is known as a supernova remnant. It consists of a high temperature plasma at tens of millions of degrees and shines brightly at X-ray wavelengths.

※4 The Chandrasekhar limit is the maximum mass that a white dwarf can support. The value is derived theoretically from relativity and quantum mechanics. The typical physical size of a white dwarf is similar to the Earth, but the Earth only has a mass about 0.000003 times that of the Sun, so a white dwarf is incredibly dense.

※5 According to the conventional theory, the central density of a standard white dwarf as its mass approaches the Chandrasekhar limit is about 2 x 109 g cm^-3. This seems a small difference from the central density measured in this research, but the slight difference can make a big impact on the brightness of the exploding supernova and on the elemental composition of the remnant after the explosion.

※6 In a high density environment, where the density exceed 2 x 108 g cm-3, an electron capture reaction can occur in which protons and electrons merge to form neutrons and neutrinos(p + e- → n +νe).

※7 “Neutron excess” means that the atom’s nucleus has more neutrons than protons.

※8 On Earth, the most abundance isotopes of titanium and chromium are 48Ti and 52Cr.

[2] Charting the Expansion history of the Universe with Supernovae
https://www.nao.ac.jp/en/news/science/2021/20210514-dos.html