Associate Professor Yoshiaki Furui of the College of Arts won the 25th Shimizu Hiroshi Award of the Japanese Association of American Studies (JAAS) for his book on the concept of solitude in nineteenth-century American literature. The book is titled Modernizing Solitude: The Networked Individual in Nineteenth-Century American Literature (University of Alabama Press, 2019). Furui teaches the Course in English and American Literature, Department of Letters. 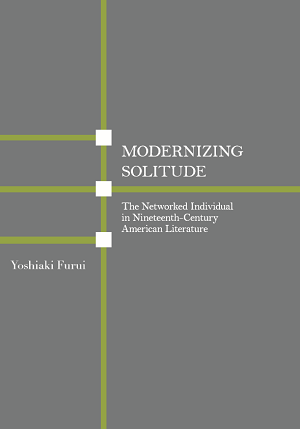 The JAAS is a nationwide organization formed for academic studies about the United States. Areas of study covered by the organization range from literature to history, culture and politics, to name a few. As a national organization for American studies, it is the only such academic society in Japan.

The Shimizu Hiroshi Award is awarded for excellent research work done by mainly young researchers who presented their works for the first time.

In his examination of the concept of solitude in nineteenth-century American literature, Furui shows how such writers experienced a kind of “networked solitude,” meaning that at times when they were physically isolated they nonetheless remained connected in imagination to the external world through various media.

Furui was originally to receive the award at the annual convention of the JAAS scheduled for June 14, 2020, but due to the COVID-19 pandemic, the convention, including the award presentation ceremony, was cancelled.

I have been devoted to my research, thinking that I would like to publish a book focusing on American literature in the United States to receive responses from both Japanese and international academic communities to my project. Having received the honorable award from the JAAS, I feel that my efforts have finally paid off. With this award as a great encouragement, I will continue to further advance my research activities at home and abroad.