A talk was held on Nov. 4, 2019, with Makoto Yukimura, the original author of the TV cartoon Vinland Saga who was invited as a guest speaker. 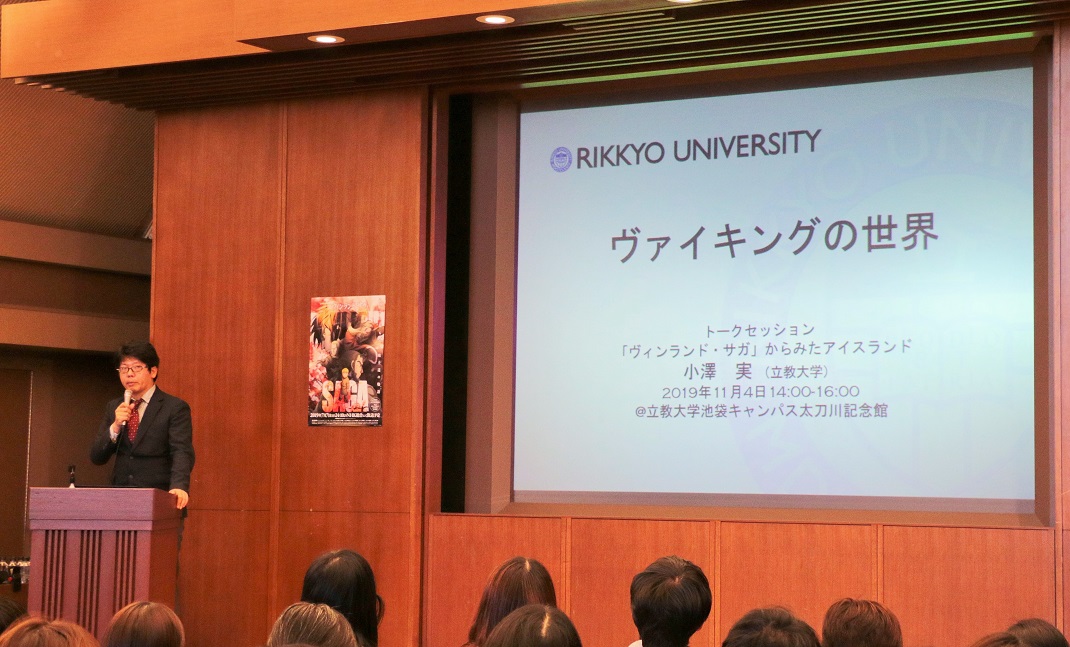 Minoru Ozawa, a professor in the College of Arts at Rikkyo University, gives a presentation.

The program was about society in Iceland during the medieval era, which is the setting of the cartoon. It also included commentary by and discussion among three researchers, allowing for a broad examination of the cartoon from academic perspectives and audience interaction.

The first half started with an outline of the cartoon, followed by a historical investigation by the three researchers on the history, literature (sagas), and socioeconomic circumstances of medieval Iceland, centering on Vikings. The researchers gave detailed commentaries, using related photos and material on current-day Iceland. The story behind the establishment of a Japanese language department at the University of Iceland in Reykjavik, following increased interest in recent years in the Japanese language and culture in Iceland, was also introduced, creating a friendly atmosphere in the packed venue, where the audience focused on Iceland in far-away Northern Europe.

From left, Makoto Yukimura, the original author; Professor Minoru Ozawa; Tsukusu Ito, a professor in the Faculty of Arts at Shinshu University; and Sayaka Matsumoto, a lecturer at the Center for Arts and Sciences at Fukui Prefectural University

Makoto Yukimura, the original author, appeared in the second half and held a talk session with the three researchers. The four panelists exchanged views on the original comic's faithful description of medieval Icelandic society. A lively discussion then followed, themed on the TV cartoon, Vinland Saga.