After a decade-long search, an international team of researchers including the Rikkyo University's College of Science have for the first time detected a gamma-ray burst in very-high-energy gamma light. This discovery was made in July 2018 by the H.E.S.S. collaboration using the huge 28-m telescope of the H.E.S.S. array in Namibia. Surprisingly, this Gamma-ray burst, an extremely energetic flash following a cosmological cataclysm, was found to emit very-high-energy gamma-rays long after the initial explosion. 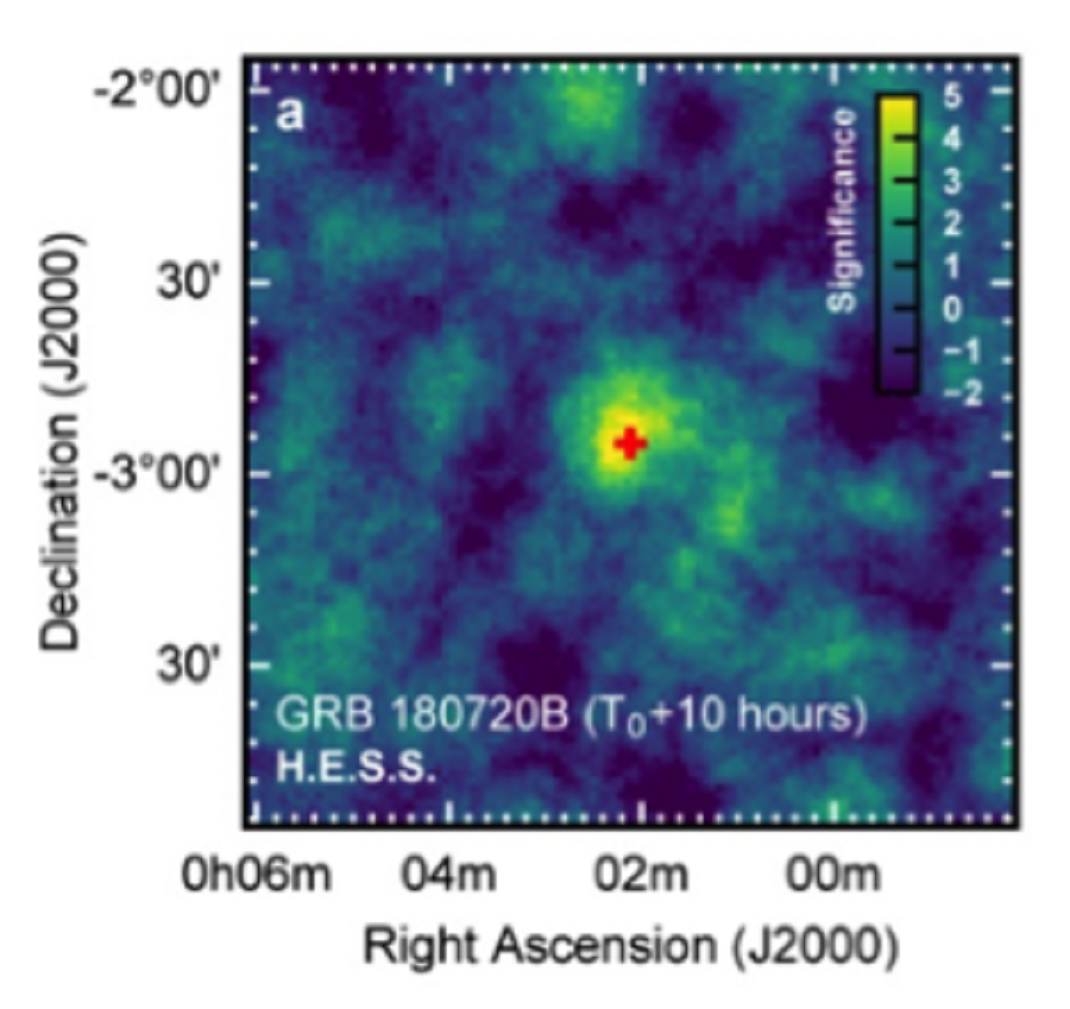 Figure 1. GRB 180720B in very-high-energy gamma light, 10 to 12 hours after the burst as seen by the large H.E.S.S. telescope. The red cross indicates the position of GRB 180720B, determined from the optical emission of the GRB. (Credit: H.E.S.S. collaboration, email: contact.hess@hess-experiment.eu)

Extremely energetic cosmic explosions generate gamma-ray bursts (GRB), typically lasting for only a few tens of seconds. They are the most luminous explosions in the universe. The burst is followed by a longer lasting afterglow mostly in the optical and X-ray spectral regions whose intensity decreases rapidly. The prompt high energy gamma-ray emission is mostly composed of photons several hundred-thousands to millions of times more energetic than visible light, that can only be observed by satellite-based instruments. Whilst these space-borne observatories have detected a few photons with even higher energies, the question if very-high-energy (VHE) gamma radiation (at least 100 billion times more energetic than visible light and only detectable with ground-based telescopes) is emitted, has remained unanswered until now.

On 20 July 2018, the Fermi Gamma-Ray Burst Monitor and a few seconds later the Swift Burst Alert Telescope notified the world of a gamma-ray burst, GRB 180720B. Immediately after the alert, several observatories turned to look at this position in the sky. For H.E.S.S. (High Energy Stereoscopic System), this location became visible only 10 hours later. Nevertheless, the H.E.S.S. team decided to search for a very-high-energy afterglow of the burst. After having looked for a very-high-energy signature of these events for more than a decade, the efforts by the collaboration now bore fruit.

A signature has now been detected with the large H.E.S.S. telescope that is especially suited for such observations. The data collected during two hours from 10 to 12 hours after the gamma-ray burst showed a new point-like gamma-ray source at the position of the burst. While the detection of GRBs at these very-high-energies had long been anticipated, the discovery many hours after the initial event, deep in the afterglow phase, came as a real surprise. The discovery of the first GRB to be detected at such very-high-photon energies is reported in a publication by the H.E.S.S. collaboration et al., in the journal 'Nature' on Nov. 20, 2019. 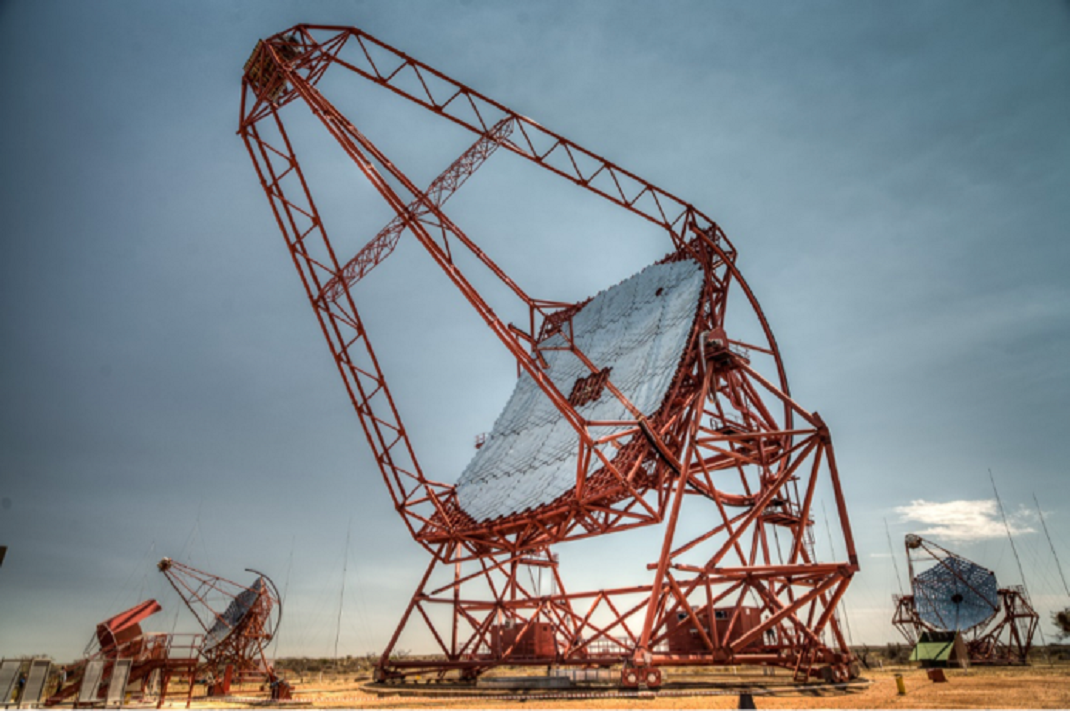 Figure 2. The large central H.E.S.S. telescope with 614 m² mirror area that was used for the first detection of a GRB in VHE gamma-ray light and two of the four smaller telescopes, each with 107 m² mirror area.(Credit: MPIK / Christian Föhr, email: christian.foehr@mpi-hd.mpg.de)

GRB 180720B was very strong and lasted for about 50 seconds – a relatively long duration indicating the death of a massive star. In this process, its core collapses to a rapidly rotating black hole. The surrounding gas forms an accretion disk around the black hole, with gas jets ejected perpendicularly to the disk plane creating the gamma-ray flashes. Elementary particles are accelerated in these jets to velocities nearly as high as the speed of light and interact with the surrounding matter and radiation, leading to the copious production of gamma rays.

The very-high-energy gamma radiation which has now been detected not only demonstrates the presence of extremely accelerated particles in GRBs, but also shows that these particles still exist or are created a long time after the explosion. Most probably, the shock wave of the explosion acts here as the cosmic accelerator. Before this H.E.S.S. observation, it had been assumed that such bursts likely are observable only within the first seconds and minutes at these extreme energies, and not many hours after the explosion.

At the time of the H.E.S.S. measurements the X-ray afterglow had already decayed very considerably. Remarkably, the intensities and spectral shapes are similar in the X-ray and gamma-ray regions. There are several theoretical mechanisms for the generation of very-high-energy gamma light by particles accelerated to very-high-energies. The H.E.S.S results strongly constrain the emission to two potential mechanisms. In both cases, however, the observations raise new questions. "Although energetically one of these mechanisms is preferred, both the shape of the H.E.S.S. spectrum, and the energy range of the emission at such late times presents a challenge to both emission scenarios." - says H.E.S.S. scientist Andrew Taylor.

This breakthrough discovery provides new insights into the nature of gamma-ray bursts. As highlighted by Edna Ruiz Velasco, PhD. student at MPIK in Heidelberg and one of the corresponding authors of the publication: "This detection has already revolutionised the way we search for GRBs with Cherenkov Telescopes. Thanks to this GRB and the lessons learnt, our recently improved observational strategy has already payed off. We can expect a future with a great number of GRBs detections at very-high energies and with this, a deeper understanding of these phenomena". 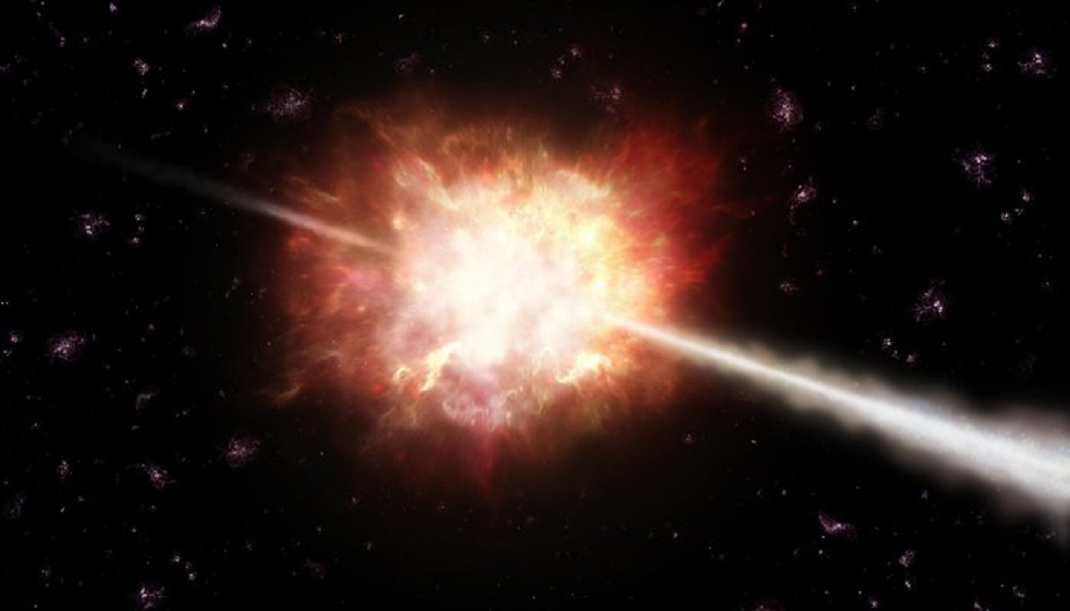 Figure 3. Gamma-Ray bursts are the most luminous explosions in the universe. Within a few seconds they radiate more energy than the sun in billions of years. Understanding the physical processes at work in these monstrous explosions are an important goal of modern astrophysics. Artist’s view of a GRB and the formation of extremely fast jets (Credit: ESO/A. Roquette)