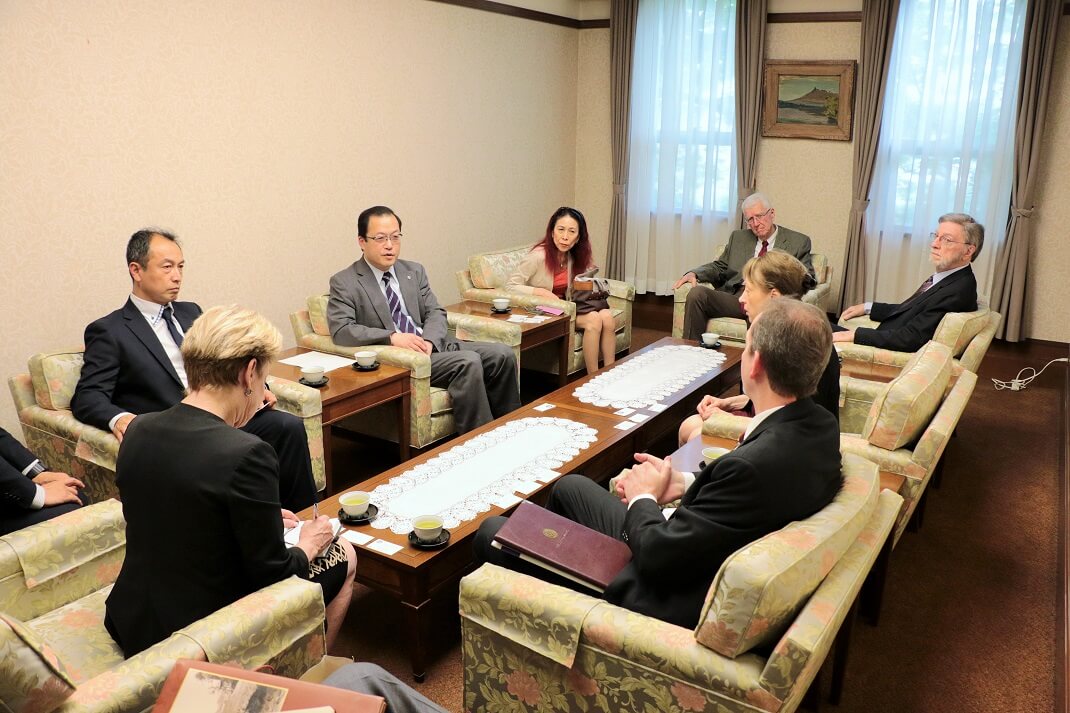 The meeting between Rikkyo University and Texas State University officials

However, the visit to Japan was not limited to the renewal of the agreement. San Marcos, where the university is located, is located in a district which has achieved significant breakthroughs in the high-tech industry. The president of the U.S. university had expressed her wish to meet and explore the possibilities of a new cooperation with Rikkyo University because it was promoting a university-wide growth strategy through collaborations between businesses and academia to improve research and education.

The signing ceremony was held after a meeting with students and a tour of the campus. The visitors from Texas State University included President Trauth and her husband, University Provost and Vice President for Academic Affairs Dr. Eugene Bourgeois, Vice President of University Advancement Dr. Barbara Breier and her husband, and Director for Strategic Industry Partnerships Mr. Ronald Epperson. The ceremony was attended by Nobuko Ikeda, Vice President for International Advancement, and Seongbin Hwang, Director of the International Office, besides President Kwak. There has been an active exchange between the students since the conclusion of the agreement with Texas State University in 2016, and the agreement was renewed on this occasion. 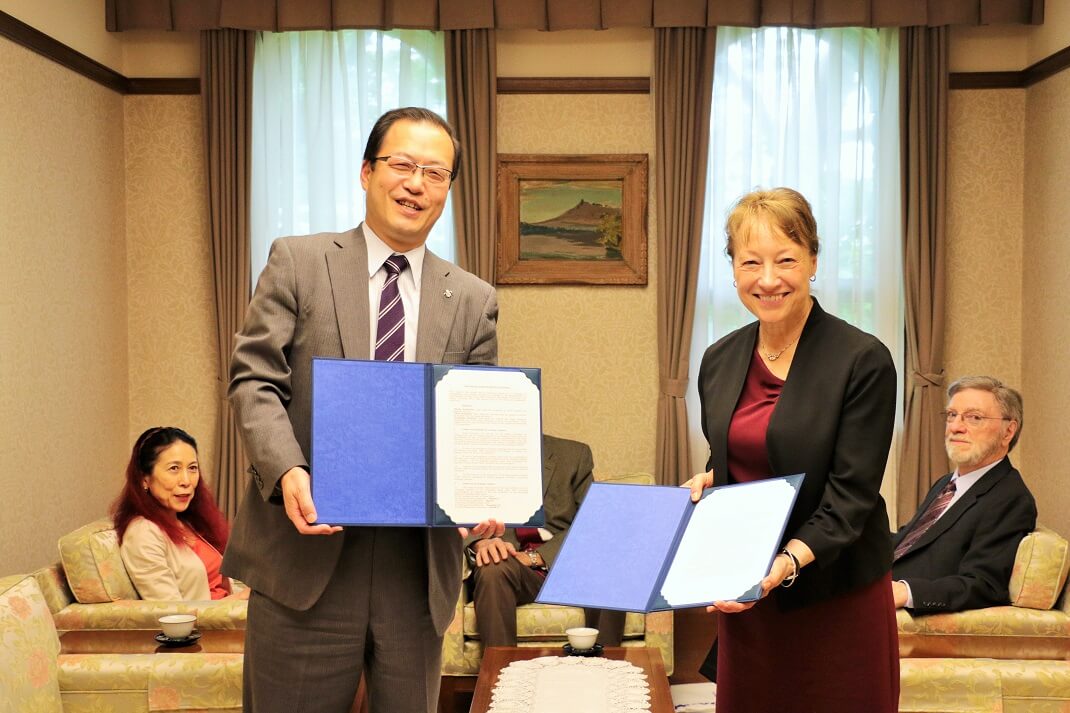 Texas State University is a state university established in 1899. Out of all the Texas state universities, it has the fourth largest number of students, with over 38,000 enrolled. According to the US News & World Report published in 2015, Texas State University ranked 12th in the western district of the United States and has earned a good reputation across the United States for having excellent programs especially in geography, criminal justice, engineering, health professions and music. The university is also known for being the alma mater of the late President Lyndon B. Johnson. The main campus has 457 acres of land. In addition to the original campus in San Marcos, located south of Austin, the Texas state capital, the institution also has a campus in Round Rock north of Austin.

At the meeting after the signing ceremony, the officials from Texas State University outlined the outstanding results achieved by promoting interdisciplinary academic programs as part of President Trauth’s initiatives for a university-wide growth. For example, they established a degree program in civil engineering focused on technology enhanced infrastructure by collaborating with the thriving high-tech industry, an approach regarded as progressive, even in the United States. President Trauth also showed a keen interest in the Graduate School of Artificial Intelligence and Science which Rikkyo University plans to establish in April 2020. This started a lively conversation about the potential for a new collaboration. Commemorative gifts were exchanged at the end of the meeting. Since Rikkyo University initiated American football in Japan, President Trauth presented the university with a football signed by the coach of the Texas State University football team.

According to the “Rikkyo Global 24” internationalization strategy, announced in May 2014, Rikkyo University aims to reform itself and stand out in the world by continuing to promote international cooperation with prestigious universities around the world. 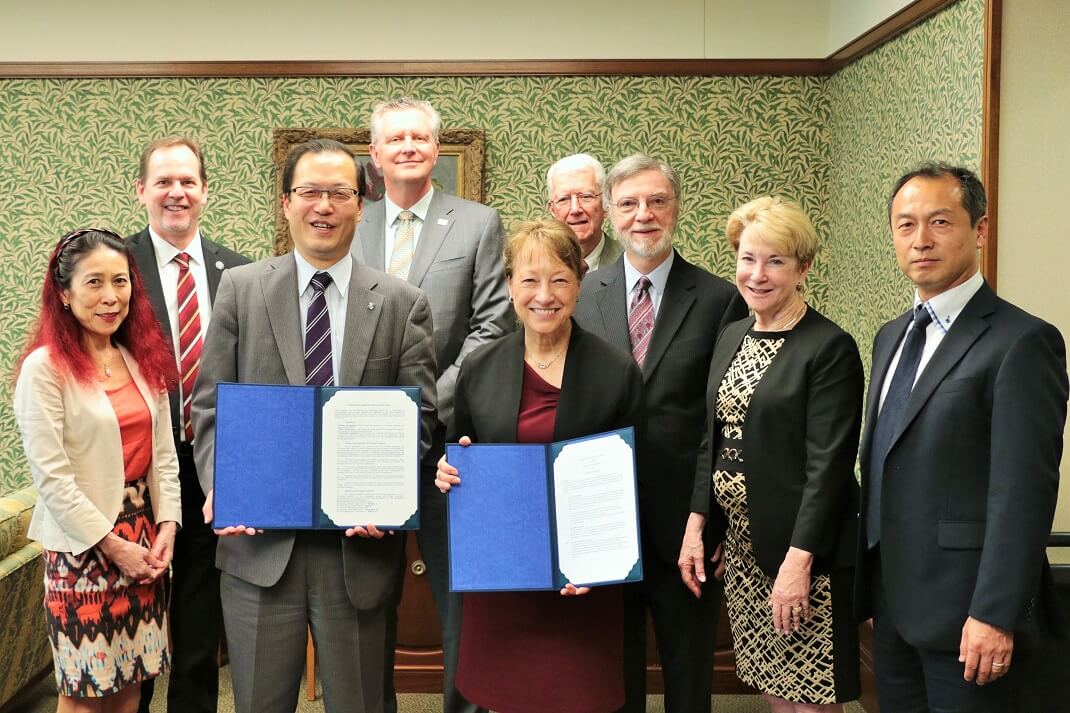 All participants pose for photos 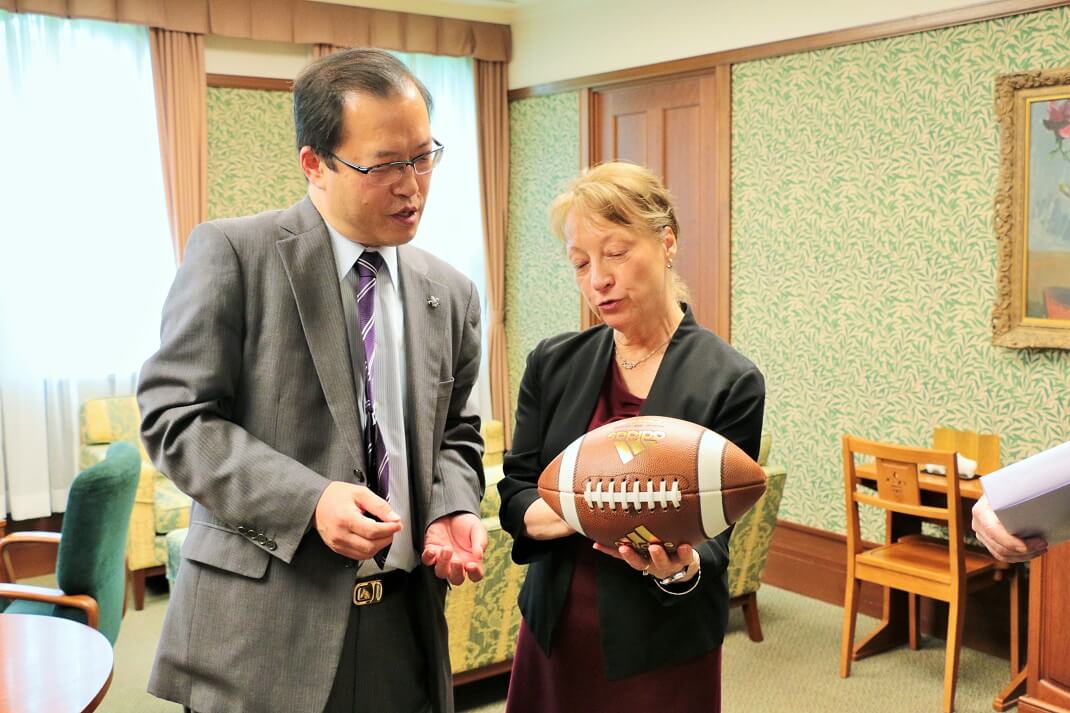