Michiaki Ogura, assistant professor of the Course in English and American Literature in the Department of Letters, College of Arts, has won the 9th Young Scholar Award from the American Literature Society of Japan (ALSJ). The society is an academic organization dedicated to conducting research on American literature and has connections with academic societies in Japan and abroad through its publications. 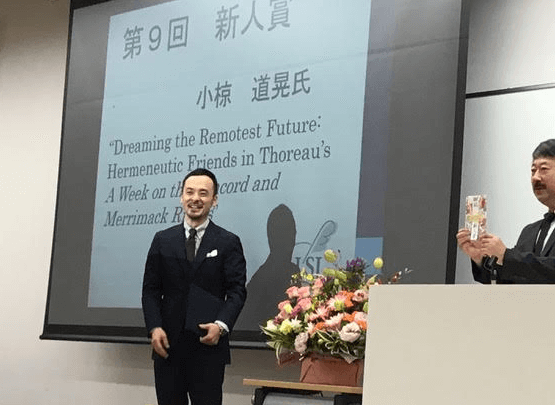 The award is given annually for the most outstanding article written by a scholar under 40 years of age, which is selected from articles published by the society’s Japanese organ “Amerika Bungaku Kenkyu” and its English organ “The Journal of the American Literature Society of Japan.”

Ogura’s English article, titled “Dreaming the Remotest Future: Hermeneutic Friends in Thoreau’s A Week on the Concord and Merrimack Rivers,” closely analyzes how Henry David Thoreau, an American writer of the mid-19th century, thought of friends based on descriptions in his work, while linking his thinking to his stance on reading. Ogura discovered that Thoreau wrote his works not for readers of his era but by dreaming of friends in the distant future.

I am honored to receive the Young Scholar Award from the American Literature Society of Japan.

Reading Thoreau’s work that was written while dreaming of readers in the distant future, and staying close to the ultimately slow pace of message transmission, seems to go against the commonly accepted norm of present-day society to put top priority on speed as a result of the development of email and social media. But, I believe as we look at literature from different ages and different countries, we listen attentively to such distant voices.