Shingo Kameda, an associate professor of Rikkyo University's College of Science, has analyzed images of the Earth taken by a telescopic camera onboard the Japanese asteroid explorer Hayabusa2 after the Optical Navigation Camera (ONC) his university research team helped develop successfully photographed the planet (Image 1) on December 4. 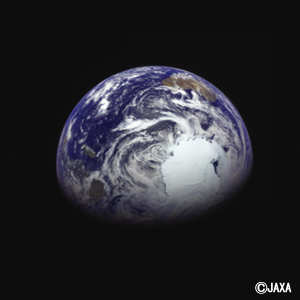 Image 1: An image of the Earth captured by Hayabusa2. Antarctica can be seen at the bottom right, with Australia at the top right.

The data analysis was conducted in collaboration with Toru Koyama, a researcher at the National Institute of Advanced Industrial Science and Technology, and Hidehiko Suzuki, a lecturer at Meiji University, among others.

Kameda and his team, comprising College of Science undergraduates and graduate students, joined a project to develop the camera in December 2011.

The telescopic camera is capable of taking seven color images of asteroids, the Earth and other planets, which shine due to sunlight reflection. The shine of planets and asteroids differs depending on the nature of the substances on their respective surfaces.

By comparing color images taken by the camera and applying the known reflective differences, researchers are able to gain information about the surface materials and their distribution .

Of the images taken by the explorer the day after its Dec. 3 swing-by of Earth on its way to the Asteroid Ryugu , two images—red and infrared—can be used to identify areas with vegetation (Images 2). The frame on the right shows New Zealand and the African continent—areas that are difficult to identify in Image 1. Antarctica, meanwhile, appears black, as it has no vegetation.

Although both ice and cloud show up as white, it is possible to distinguish between them because the infrared reflectivity of ice is lower than that of cloud. Based on data from green and infrared images, Image 3 (right) shows ice in blue and cloud in white.

Kameda’s research team conducted initial performance tests on the telescopic camera in January 2012, carrying out further examinations and experiments in the run-up to the explorer’s launch in December 2014.

The successful observation of the Earth by the camera confirmed ongoing high performance levels, despite violent vibrations at the time of its rocket-assisted launch, and the harsh environment of space.

Hayabusa2 will use the camera to examine Ryugu’s surface and decide on a landing spot to collect samples of organic substances and hydrous minerals for bringing back to Earth. The explorer is scheduled to arrive at the asteroid in 2018.

Images 2: A pseudo-color image (left) made by combining two of the camera’s images shows areas with supposed vegetation. The image on the right superimposes the left-side image onto an image of the Earth. In the right-side picture, New Zealand can be seen on the right, with the African continent and Madagascar on the left, while the top of the image shows an area near Indonesia and an area around the Indian Peninsula in the top left.

Images 3: Part of Antarctica (identified in the left-side picture) is shown in a pseudo-color image (right) made from two color images taken by the camera. The Transantarctic mountains can be seen running from the top to the bottom of the picture.