In November 2021, Rikkyo University became the only private university newly selected for the “Inter-University Exchange Project (Re-Inventing Japan Project); Support for the Formation of Collaborative Programs with Universities in Asia (working name)” when the Ministry of Education, Culture, Sports, Science and Technology (MEXT) announced the results of screening for the project. The project aims to foster human resources who can excel on the global stage and strengthen Japanese universities’ global reach. The government will provide financial support for undertakings made through international educational collaboration to dispatch Japanese students abroad and accept international students, while aiming to guarantee the quality of higher education. We asked Hideyuki Matsui, Vice President for International Advancement, about Rikkyo University’s specific undertakings for the project, as well as its internationalization efforts. The following is an excerpt from the interview.

Rikkyo University was founded in 1874 by Channing Moore Williams, a missionary of the Episcopal Church. So it can be said that the university had an international identity from the beginning. The merits of Rikkyo’s international aspects were recognized in 2014 when the university was selected for MEXT’s Top Global University Project. Rikkyo has made pioneering efforts within the framework of this project such as launching the Global Liberal Arts Program (GLAP) and the Global Liberal Arts Minor Program. The “Inter-University Exchange Project (Re-Inventing Japan Project); Support for the Formation of Collaborative Programs with Universities in Asia (working name)” is one of the core undertakings that will take over from the Top Global University Project.

*The rankings are released every year by Times Higher Education (THE), a British educational journal. The University of Tokyo ranked sixth, the highest for a Japanese university.

the National University of Singapore (Singapore)

Under the project, the four universities will form the Asian Consortium for Excellence in Liberal Arts and Interdisciplinary Education (ACE), an international inter-university group working on the common theme of liberal arts education. It aims to foster “global leaders of Asian origin for future co-creation” who think and act with the aim of solving problems in Asia and elsewhere in the world based on a liberal arts education. Doing so involves transcending academic fields and geographical boundaries through collaboration with students and people in the Asian cultural sphere. It is my sincere wish that students who take part in the project will play a key role that transcends national borders and show leadership in guiding society and organizations in a good direction.

What are the joint international minor (ALS) and C6ubic Curriculum, which are designed to cultivate six core skills? 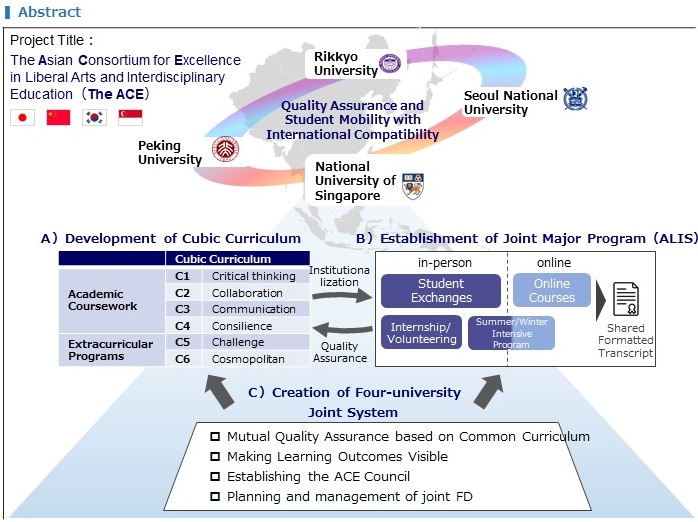 Asian Liberal and Interdisciplinary Studies (ALS), a joint international minor, will be the main pillar of this project’s program, which consists of 1) long-term exchange programs among the four universities; 2) intensive program (summer/winter); 3) establishment of a common online subject group; 4) internships or social contribution activities; and 5) international cultural exchanges. The four universities will also jointly develop and operate C6ubic Curriculum, which is designed to cultivate six core skills starting with “c”: critical thinking, collaboration, communication, consilience, challenge and cosmopolitan. We plan to issue an official transcript of the common format signed by the four universities to students who meet the prescribed requirements and are recognized as having acquired the six core skills.
1) Long-term exchange programs among the four universities
In principle, the four universities will dispatch a total of about 12 students per year to partner universities for one year (two semesters). Basically, each student will be dispatched to two universities, while taking classes from the joint online subject group to gain knowledge at the third university. Students will mainly take courses conducted in English, which enable them to acquire the core skills of C6ubic Curriculum. In overseas studies, students can study in more than three countries, including Japan. Participating students will be able to achieve a great deal, because they can compare the culture and mindset in Asian countries with their own.


2) Intensive Program (summer/winter)
Programs consisting of lecture and activities are for students who are enrolled in the long-term exchange program among the four universities and last 14 days or so (subject to change). The four universities plan to take turns in providing the program’s venue and all dispatch teachers for the program. Students will engage in project-based collaborative work with students from other countries. This will inspire participating students, who will be able to learn first-hand about diverse ways of thinking in other countries through group discussion and presentations. 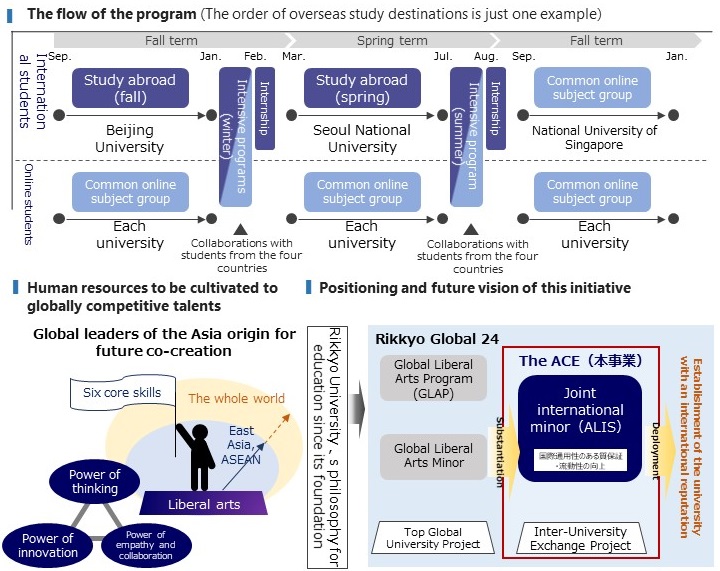 3) Establishment of a common online subject group
Each university will offer relevant subjects online, creating a subject group consisting of around four subjects per semester or around eight per year, whose credits are transferable among the four universities.

We are also considering a scheme that allows students outside the project to take intensive programs and the common online subject group to the extent that is possible.


4) Internship or social contribution activities
We are thinking about having participants in the long-term exchange program among the four universities to take an internship or engage in social contribution activities for two weeks or so in the summer and winter recesses. The program offers participants a chance to act on their initiative in solving various problems in the Asian region and think about building an international career in the future through work experience or activities in foreign countries.

Area of learning is based on liberal arts

The four universities will each study and decide details on the area students learn in the joint international minor ALIS, but based on the liberal arts. In my opinion, there are two aspects when thinking about what defines liberal arts: One is what do you learn, and the other is how do you learn. What you learn hinges on how many different areas you can deal with. That’s because, in some respects, liberal arts are the study of what the world is all about. As for how you learn, it can be said that it’s a question of how you digest and transmit concepts in the process of recognizing the world. The program’s key characteristic is that it offers ways of learning such as group discussions and presentations, as well as sharing what students learn through internships and various roles in society. This program is an iconic undertaking for Rikkyo University’s liberal arts education, along with its internationalization endeavors. We would like it to provide our university with a way of thinking deeply about what a liberal arts education means.

English is the working language in the program. Students will also aim to master basic Korean and Chinese

In the program, including the segments held at Rikkyo University, English will be the basic working language. The level of English proficiency required depends on each university, which set their own required level of the International English Testing System (IETS) and other English proficiency examinations. Most of them require a score of around 6.0 in IETS. Students are expected to acquire higher English abilities or obtain an IETS score of about 6.5 when they complete the program.

The exchange program is operated uder a mutual tuition fee exemption scheme among the four universities, in addition to Rikkyo University’s robust financial support system to students, including its provision of travel expenses, living expenses and scholarships for studying abroad. Each university will provide accommodation to the international students it accepts.

Rikkyo University has focused on internationalization for many years. This endeavor was reinforced in 2014 by the Top Global University Project. Because of its long-term efforts in this regard, Rikkyo University was able to partner with the leading Asian universities and be selected for “Inter-University Exchange Project (Re-Inventing Japan Project); Support for the Formation of Collaborative Programs with Universities in Asia (working name).” We also plan to continue exchanges with the three partners in one way or another after this subsidized project ends, to bring our internationalization efforts to a higher level.

In recent years, Rikkyo University has tried to become a university with an outstanding ability to convey its message across Asia. In planning this program, we were able to solidify our relationship with the three universities. We would like to take this opportunity to increase the number of students going to Asian nations for studying and realize substantive international exchanges in Asia.

*The content of this article was correct as of December 2021 when the interview took place and may not reflect the latest information.

Born in Aichi Prefecture in 1970. Graduated from the Faculty of Law, the University of Tokyo in March 1994 and completed the master’s program in law at the university’s Graduate Schools for Law and Politics in March 1996. After serving as a program officer at the university’s Faculty of Law, he became a full-time lecturer at Rikkyo University’s College of Law and Politics in 1999. He was promoted to assistant professor and associate professor before becoming a full professor in October 2008. He has served as chair of the Department of Law, College of Law and Politics, dean of the President’s Office and vice director of the Organization for Global Initiatives.