A research team led by Professor Toshiya Hashimoto of Rikkyo University’s College of Tourism has produced a walking map that highlights tourism resources and introduces experts active in various fields in the village of Kitashiobara, Fukushima Prefecture. The map is a result of research into the best way to aid reconstruction efforts in areas battling misleading information in the aftermath of the 2011 Great East Japan Earthquake. Copies of the map were presented to representatives of Kitashiobara at the village office on February 23 to mark the map’s completion. The maps, which have already been distributed to all village households, are available at the Urabandai Ecotourism Association and the Urabandai Tourist Association, among other locations. 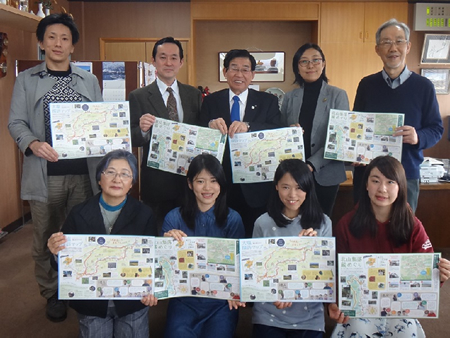 An event to commemorate completion of the map was held at Kitashiobara Village Office on February 23.

Hashimoto and his team started their research in Kitashiobara in the 2013 academic year to help unearth and sustainably utilize potential tourism resources, thus enabling areas adversely affected by false information to rebuild themselves. The village, located in Urabandai—the prefecture’s most picturesque natural tourist spot—has seen a sharp decline in tourists since March 2011.

The research team began its project by interviewing officials working in the village’s public institutions and tourism-related businesses to ascertain how the situation has changed over time vis-à-vis damage caused to local tourism by spurious information. The researchers then examined pertinent documents, interviewed villagers, and conducted fieldwork in conjunction with locals to identify the area’s resources and attractions. The results were then incorporated into a phenology calendar and a resource map. Based on these creations, the team organized and conducted eco-tours, with students playing a leading role in working out a concept for the tours, which were held during the 2014-15 academic years. The walking map is based on the resource map, and introduces attractions identified by the students when examining the history, vegetation and comestibles of the village’s Oshio and Kitayama districts.

Highlighting local resources is expected to strengthen residents’ pride and facilitate the creation of a system to attract more tourists (via the introduction of eco-tourism) and a new framework for cooperation between local residents and university students and professors to help overcome problems associated with misinformation-related damage. These endeavors are also expected to help resuscitate tourism in areas that have suffered tarnished reputations as a result of incorrect information following the 2011 Great East Japan Earthquake.