Rikkyo University inaugurated a prayer room on the university’s Ikebukuro Campus on April 18 to better serve the needs of the university’s increasing number of international students. For the project, Rikkyo collaborated with space-creation specialists TANSEISHA Co. Ltd., marking the first time that the company has installed a prayer room at a Japanese academic institution. While the new facility has been designed primarily for Muslim students from overseas, it is available for use by followers of all faiths.

"The installment of the prayer room is part of Rikkyo University’s efforts to push internationalization, and is aimed at creating an on-campus environment that allows people from various cultural backgrounds to come together," said Rikkyo University President Tomoya Yoshioka during a ceremony to mark the opening of the prayer room. "I hope the room will serve as a place for international exchange and understanding between different cultures."

Yoshimitsu Aota, president of Tanseisha, also spoke at the event, saying: "I’m really delighted that my company was able to help Rikkyo University in its efforts to propel global education. Mutually acknowledging and respecting differences in culture and ways of thinking will help students nurture the creativity to produce new things: that will be a true fruit of global education. I’m convinced the human resources developed in this environment will play active roles across the globe."

Rikkyo University (Toshima Ward, Tokyo; President: Tomoya Yoshioka) has been chosen as one of the sponsored institutions of the Japanese government’s Top Global University Project, based on concepts contained in the universities internationalization strategy, "Rikkyo Global 24", which was published in May 2014. In line with "Rikkyo Global 24", the university aims to roughly quadruple the number of its international students to 2,000 by 2025. In addition, starting in September 2016, the university will launch a new international cooperative graduate program (Linkage Program) that will allow students to complete their respective degrees entirely in English, and will accept up to 20 graduate students from Indonesia annually. The prayer room has been built to provide a more accommodating environment for the incoming students.

TANSEISHA Co. Ltd. (Minato Ward, Tokyo; President/CEO: Yoshimitsu Aota) offers total-support solutions, from research and planning to design and layout, production and construction, and operation of commercial and cultural spaces, etc. In November 2014, the company started distributing its "Wanoma" prayer room, which was jointly developed with the Japan Halal Business Association to help domestic travel and tourism operators as well as local governments in their efforts to attract more Muslim visitors. The prayer room incorporates the Japanese sensibilities of space and design, and one such unit has been installed at Naha Airport International Terminal Building. The project with Rikkyo University is part of Tanseisha’s efforts to promote cooperation with academic institutions. 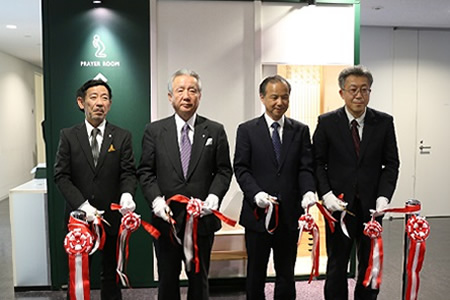